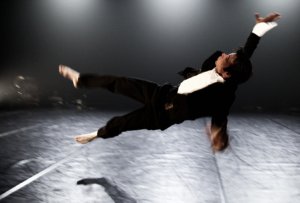 Mute Comp. Physical Theatre move on the edge of the physically possible – a feature of Kasper Ravnhøj’s distinctive movement language that has also become known as crash dance.

Teaching is an important part of Kasper Ravnhøj’s work and he is an influential factor in the spread of dance, physical theatre and the movement language underlying his choreographies. Attending a workshop or a master class with Kasper Ravnhøj include elements of improvisation/acting, Tanztheater, contemporary dance and contact improvisation with an emphasis on flow, flexibility and partner work.

Since he is working with themes and specific physical tasks as motivation for the movement, rather than formalized technique, participation does not necessarily require any dance experience but more importantly: a willingness to take risks and literally throw oneself into the mix.

Facts: For more than 10 years Kasper Ravnhøj has taught his style and methods to people ranging from amateurs to professional dancers, actors, performers, directors and choreographers.

Internationally he has given master classes and workshops at Bard College in New York, Danscentrum Syd and Dansstationen Malmö, Iceland Academy of the Arts, Korean National Sports University, Korea National University of Art in Seoul, and at international festivals in Saint Petersburg, Oslo, New York, Beirut and Reykjavik.